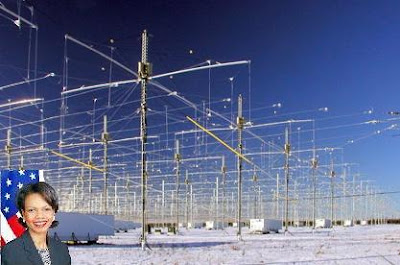 QUESTION: Madame Secretary, thank you so much for this interview with Radio Farda. Let me start with a question that's on the mind of many Iranians these days. Will there be a U.S. or Israeli attack on Iran's nuclear facilities?

SECRETARY RICE: Oh, we believe very strongly and President Bush has made very clear that this problem with Iran about its nuclear technology can be resolved diplomatically. That is what we're working on. We want very much for the Iranian people to be able to have good relations with the United States. There's no reason that this great civilization with a great history and a great culture should be isolated from international politics. And so there is a diplomatic way to do this, and that's why the United States, as a part of the group that is Germany, France, Great Britain, Russia, and China, has made a proposal to the Iranian Government that we hope they will accept.

QUESTION: Madame Secretary, Iran insists that its nuclear program is peaceful and, defying UN resolutions, continues with the enrichment of uranium. Is it a precondition for United States for bilateral talks and for lifting of the sanctions for Iran to end its enrichment program, and could you perhaps envision future talks without preconditions?

SECRETARY RICE: Well, the reason that it's important for Iran to suspend its enrichment and reprocessing, to come to the table once it has suspended, is that we shouldn't be in a position of talking while Iran continues to improve the very technologies that could lead to a nuclear weapon.

But if Iran wants a peaceful program, it can have a peaceful program. Russia has a reactor, the Bushehr reactor. The United States has been supportive of what Russia is doing there. We have offered, in the proposal that the P-5+1 have made, to help Iran with civil nuclear technology at the highest possible levels. It's just that when you enrich and reprocess, you are perfecting the technologies that can lead to a nuclear weapon; and because of the Iranian regime's history of lying to the IAEA, the International Atomic Energy Agency, it can't be trusted with enrichment and reprocessing. But it can have civil nuclear power. And so when the Iranian regime tells its people that the West is trying to prevent Iran from having very sophisticated technology, it could not be further from the truth.


Missiles won't work, Can I be hearing correctly? I remember something about all options on the table, including nuclear, but never anything so blatant as the threat of using Star Wars Weapons.